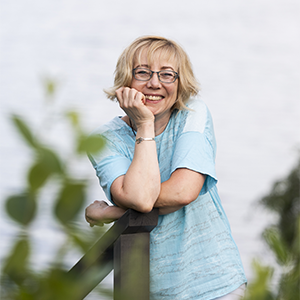 Tervola (Koivu) and everywhere in Finland, Estonia and Europe
Teaching and coaching Aura Mediators™ and Aura Mediator Instructors™ in Europe

She is travelling and working all over Finland and Europe with AuraTransformation™ and teaching future Aura Mediators™ & Instructors™ as a Certified Aura Mediator Instructor™.

Johanna has four children born in 1992, 1994, 1996 and 2008. She is also a very proud “Ämmi” (granny) for two grand children and looking forward to get more 🙂 ! She is fascinated about new time children & their energies and also familiar with them because of her own children & grand children.

Johanna graduated as a pediatric nurse in 1991 and worked with premature born babies and their families until 1999. After that, she did different kind of projects as a family worker and a project coordinator until 2005.

In the years 2004 – 2006 many things changed radically in Johanna´s life. During those years and in the following years she moved to Porvoo in southern Finland and learned Indian Head Massage, traditional Finnish massage, NLP (Neuro Linguistic Programming), Reiki, Laughter Yoga and many other treatments.

In 2008 Johanna noticed that big differences happening in her energies and body. She started to search for more information without knowing exactly what she was looking for.

In April 2011 she ended up joining a lecture running by Berit Reaver, called “Crystal Children, Indigo Children and AuraTransformation™”. The lecture was a mind blowing experience, so after that, Johanna booked time for AuraTransformation™ . “I got my AuraTransformation™ in the 6th of May 2011 together with a dear friend of mine. It was, and still is, one of the most important experiences in my life!”

She gives lectures and run webinars about the New Time Energies in Finnish and in English. She also organizes different kinds of welfare lectures and events.

In her company JoyPack, she has been offering following services since 2005: